"Once Beyond a Time" by Ann Tatlock 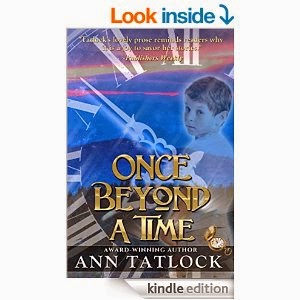 Publication Date: December 4, 2014
After settling into an old house nearly hidden on the side of a mountain, a broken family discovers that their new home is no ordinary place. The family can see and speak with people who have lived there in the past, and with those who will live there in the future. Are these people apparitions or real? Could the house itself be the stuff of mountain lore, a place where all of time is happening at once?

It's 1968, and Sheldon and Meg Crane have just moved their family from suburban Philadelphia to the town of Black Mountain, NC. Sheldon has resigned in disgrace from the ministry after an affair. He will now sell used cars for his brother-in-law's auto dealership. Sheldon is burdened by his wife's unwillingness to forgive and his daughter's anger over the move. The oldest son is in Vietnam. The only happy member of the family is his eight-year-old son, Digger. But then, Digger suddenly disappears. Has he been kidnapped or has he wandered off into the mountains? How does the "house beyond time" show one family the healing power of forgiveness and the loving sovereignty of God? 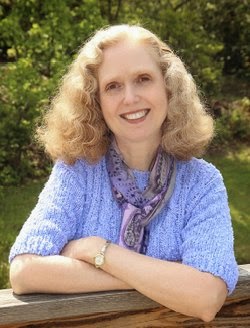 I knew I wanted to be a writer from the time I tapped out my first stories on my grandfather's old manual typewriter in the summer of 1973. I studied English and theology in college and later went on to earn my master's degree in journalism from Wheaton College Graduate School. I worked as a writer and editor for Decision magazine from 1987-1992, when I left to pursue fiction writing fulltime. I find great satisfaction in my work, and I especially enjoy hearing from my readers. In addition to writing, I'm also the managing editor of Heritage Beacon, the historical fiction imprint of Lighthouse Publishing of the Carolinas.

Ann Tatlock is a novelist and children s book author. Her books have received numerous awards, including the Christy Award, the Midwest Book Award and the Silver Angel Award for Excellence in Media. She also serves as managing editor of Heritage Beacon, the historical fiction imprint of Lighthouse Publishing of the Carolinas. She lives with her family in Western North Carolina. Please visit her website at anntatlock.com.

"Once Beyond a Time" by Ann Tatlock is a really good book in spite of my initial reaction which was I don't like this story! This story deals with a preacher whose family has to move due to his affair with his wife's cousin. There is also mention of drug use (weed) by his teenage daughter.

I really started following the story more as Digger comes up missing. So this story is about betrayal and trust and forgiveness and Hope. I always hate to add this to a review because I want what I read to show God, but because I know that not everyone likes Christian stories I do add this statement, God is shown in this book but the story is  not preaching and yes I believe  nonChristian would like this book. This book even has a character saying he doesn't believe and yes I was hoping that by the end of the story he had changed his mind, he didn't, I hope this doesn't mean that I have added a spoiler in this review!

Once Beyond a Time shows how a family in turmoil might look from God's point of view--outside of time. Characters from different eras engage with one another as the story unfolds. This story is filled with history and a certain "Star" plays an important part of this story! Have I peaked your interest in reading " Once Beyond A Time" ? I hope so as it might just change your mind about time and why things happen the way they sometimes do!

And I have to tell you that towards the end of the book my emotions kept changing from feeling sadness to happiness and to I knew that was going to turn out that way to wow I really didn't see that happening! I won't tell you if the book has a happy ending or not but I will tell you I don't think you will feel that you wasted your time if you pick up this story and read it! I know I don't feel like I wasted my time!

"Once Beyond a Time" by Ann Tatlock is definitely a five star novel!

Just to increase your appetite a little more here is a quote from the book " We can live in the now and remember the past, but we have to trust the future to the One who is already there, and who has at least told us in His Word that we're moving toward a happy ending.That's all we're allowing to know, but it's enough. don't you think?"

Have you ever started a book and within a couple of chapters you think I don't like this book and why did I ask for a copy to write a review on but then you are really surprised when you love the book and you wish there was a series. Well "Once Beyond A Time" is such a book for me! I was given a copy by Avid Reader Reviews.com for my honest review.
Posted by Debbie Curto at 8:33 AM No comments:

"An Empty Cup" by Sarah Price. 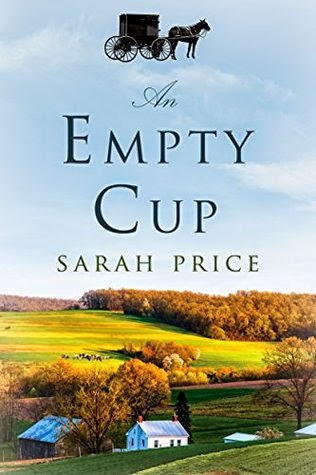 Publication Date: April 14, 2015
Amish woman Rosanna Zook lost her self-confidence within the confines of a loveless and abusive marriage. In the years spent quietly dealing with her burdens and dutifully caring for others, she forgot her sense of self and ability to feel. But after her first husband’s untimely death, she gets a second chance with Reuben Troyer, a godly man who welcomes Rosanna and her two children into his life.
Despite the love and respect she finds in her new marriage, Rosanna soon learns that juggling the demands of her family and church community is more than she can handle. When Rosanna becomes ill, she is forced to confront a hard truth: one empty cup cannot fill another. For a woman who has spent her life giving, will Rosanna finally be able to let go and receive? 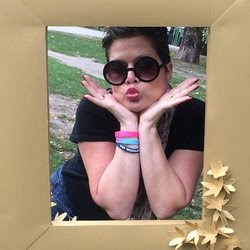 ECPA Christian Fiction Bestseller (June 2014, July 2014)
Amazon Top 100 Author for Books & eBooks ( December 2012, January 2013, February 2013, April 2013, May 2013, August 2013, September 2013, February 2015)
-------------------------
Sarah Price self-published her first book, Fields of Corn, in 2009, a book she wrote thirty years earlier while studying anthropology and writing at Drew University (Madison, NJ). With her Anabaptist upbringing, she was drawn to the amazing culture of the Amish of Lancaster County where Ms. Price is heavily involved with numerous Amish communities where she is considered family by some and friend by most others. Fields of Corn became an Amazon bestseller and fans began asking her for more books.
In 2013, she signed with Realms, a division of Charisma House, to publish the Amish Classics series. Initially focusing on the retelling of Jane Austen's timeless classics from within an Amish setting, her first traditionally published book, First Impressions, A Retelling of Pride & Prejudice, debuted on the ECPA bestseller list. She intends to continue retelling classics, including the Bronte sisters and Victor Hugo, as she enjoys "raising the bar" on her own intellectual stimulation as well as that of her expansive base of loyal readers.
In 2014, she signed with Waterfall Press and published An Amish Buggy Ride which because the #1 bestseller in Religious Romance.
In 2015, she also began writing Young Adult fiction with her first book, Diehard Fangirl launching on April 17, 2015. Her focus is on helping young teenagers with self-esteem issues as well as educating parents about the good and the bad impact of social media on their daughters
Follow her on social media:
Blog:http://www.sarahpriceauthor.com.
Facebook: http://facebook.com/fansofsarahprice.
Twitter: @SarahPriceAuthr
Instagram: @SarahPriceAuthor
Goodreads: https://www.goodreads.com/SarahPrice
FAMILY HERITAGE
During the early 1700s, the Preiss family arrived in America aboard an old sailing vessel called the Patience. The family left Europe, escaping Catholic persecution for their Anabaptist beliefs. Sarah Price comes from a long line of devout Mennonites, including numerous church leaders and ministers throughout the years.
In 1969, Sarah Price was born in Pennsylvania and lived on the land of her ancestors, Johannes Preiss and "King Tammany", otherwise known as Tamanend, a chief of the Lenni Lenape nation in the Delaware Valley.
In the early 1970s, her family moved to Morristown, New Jersey where she still resides with her husband, two children, and assortment of animals.
Ms. Price has advanced degrees in Communication (MA), Marketing (MBA), and Educational Leadership (A.B.D.).
Ms. Price was a former full-time college professor. After being diagnosed with breast cancer in 2013, she now writes full-time.

My Review:
Oh my, hope I can sleep tonight I have just finished a book that the ending literally has me crying and thinking about my life. It is fiction but "So Real". Usually books are a good thing before sleep but this one might be an exception, not that the book is bad but just the opposite. All should read this book, especially those that are givers. The book is "An Empty Cup" by Sarah Price.
This book is about an Amish woman named Rosanna who in her first marriage is abused by her husband. She has learned to hide herself in giving to others but soon learns that there is a price to pay for doing so. Yes, this book is an fictional Amish story but not the typical one as it deals with a subject that we Englisches ( non Amish people) think they don't have to deal with which is depression.
It is easy to see that Sarah Price does her best to give her readers a complete look into the Amish culture in this book as she does with all her other books, ( I think "An Empty Cup" is my second favorite  book by her, the first is "Fields Of Corn" just because that was the book that brought Sarah Price into my life).
I could go on and on and say why this book is so wunderbar (wonderful) but I won't. I will just say two things "One Empty Cup" cannot fill another, and "Givers need to receive too." You need to read this book and follow the life giving messages clearly written within the pages of this story.
I was given a copy by NetGallery and the publisher for my honest review!
http://www.amazon.com/Empty-Cup-Sarah-Price-ebook/dp/B00OM9OKE2/ref=asap_bc?ie=UTF8
Posted by Debbie Curto at 6:05 AM 1 comment: