"Charity’s Cross" by MaryLu Tyndall Book Tour and Give Away

Book Information: Charity’s Cross
Author: MaryLu Tyndall
Genre: Christian Historical Fiction
Book Jacket:
Suspected of killing her husband, Charity Westcott flees on the first ship out of Portsmouth, England heading for the colonies. Loathing all men after her abusive marriage, she hopes to reunite with her family in Charles Towne, but the ship ends up in Nassau. When she spots her husband’s brother, who is intent on seeing her hang, boarding her ship, she jumps overboard.
Elias Dutton, preacher and son of the famous pirate, Rowan Dutton, must get to Barbados as soon as possible. His sister is in danger, and his parents have charged him with her safety. He cannot let them down—again.  But after rescuing a madcap woman from the bay, he now finds himself tricked into masquerading as her husband so they both can procure passage to Barbados.
Pirates, storms, shipwreck and betrayal threaten to delay the couple in their journey even as sparks fly between them. With her brother-in-law in fast pursuit, the last thing Charity wants is help from a man, especially a religious one, but she has no choice. After Elias’ heart was broken by a sordid woman who nearly ruined his life, he seeks a godly woman pure as the virgin sands of the Caribbean. He believes he has found such a woman in Charity. Until he discovers she is a murderer and is now faced with two choices: letting her go or turning her in to the authorities. 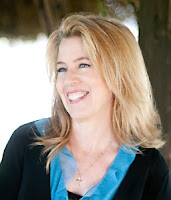 About the Author
Award-winning author MaryLu Tyndall dreamt of pirates and sea-faring adventures during her childhood days on Florida’s Coast. With more than seventeen books published, she makes no excuses for the spiritual themes embedded within her romantic adventures. Her hope is that readers will not only be entertained but will be brought closer to the Creator who loves them beyond measure. In a culture that accepts the occult, wizards, zombies, and vampires without batting an eye, MaryLu hopes to show the awesome present and powerful acts of God in a dying world. A Christy award nominee and Inspirational Readers’ Choice Award winner, MaryLu makes her home with her husband, six children, two grandchildren and several stray cats on the California coast.

Choices. Do the choices we make in life have consequences? Or is there always someone or something there to bail us out of trouble—friends, parents, church, the government? It seems in our present culture, nobody owns up to the consequences of their actions, but instead we prefer to blame someone else, anyone else, and even things like our heritage and status for our own failings. Often people blame God, don’t they? Being all-powerful, He is an easy choice to blame when things go wrong. After all, He’s God. Couldn’t He have done something?
Charity’s Cross is about choices and consequences, about life and pain and betrayal, but most of all, it’s about trusting the only One who can lead us down the right path. I wrote Charity’s Cross at the request of so many fans that I fear if I didn’t write it, it would have kept me up at night. I hate to disappoint my readers. You see, Charity is the forth sister in a trilogy I wrote several years ago about her three siblings, the Charles Towne Belles trilogy.  The three sisters and their admiral father moved from England to Carolina where they had many romantic adventures, but they left Charity behind because she had already married. In the first three books I hinted that poor Charity was in a bad marriage, and this was enough to drive my readers mad to know what happened to her.
Charity’s Cross, like all my books is what I call an adventure romance with deep spiritual themes. It is my goal not only to entertain but to inspire others to follow Jesus more closely. If I haven’t done that, I haven’t done my job.
My Review: I had this book "Charity's Cross" by MaryLu Tyndall to read and I started looking at the description and thought "Oh great, a book about pirates, how can it be a Christian book and besides that I know I am not going to like it but because I committed myself to read and review this book I will have to read it. First, through I had to read the other three books in this series (Charles Towne Belles) because I just have to read books that are in a series in order,(these books don't have to be read in order as they can be standalones and you don't have to read the other three at all in order to enjoy and understand "Charity's Cross.) but my preferences being what they are I brought the other three books in the series and I have to say I am really glad I did.  Here are some of my facebook post about the first books in this series. "The Red Siren" by MaryLu Tyndall was GREAT. NEVER THOUGH I WILL BE SAYING THAT ABOUT A BOOK ABOUT PIRATES. YES, GOD MESSAGE WAS SHOWN IN THE STORYLINE. All I can say is become a reviewer and you just might find yourself liking genres you thought you wouldn't. "The Red Siren" is probably my favorite of the series.Just goes to show you are never too old to change and broaden your horizons.
So, I have read all four books in this series and I have even sent a message to MaryLu Tyndall asking if there were going to be anymore stories about these four sisters and their pirates. In "The Red Siren" one of the sisters was a pirate herself. I really think "Charity's Cross" has more of an impact of spiritual matters than the other three. "Charity"s Cross" is a great book but it has scenes that are tear jerking!"
I am including two quotes from the book that really spoke to me.“Not all prayers get answered the way we wants, Miss.” “Some don’t get answered at all,” she retorted. “Or perhaps only good people’s prayers get answered.” He laughed. “God’s no respecter o’ persons, Miss. As long as you are His child and sincere in your prayer, He hears and answers.” “Then I must not be His child.” “If you’ve received the sacrifice of His Son, Jesus, on your behalf, then you are His child. He adopted you in His family.”
“God? What had He to do with any of it?” he said softly. “’ Twas completely a consequence of my own actions that led to the disaster. Why are people always so quick to blame God for every mishap?” “Because He has the power to protect us and to change things if He wants. Isn’t that what your precious Bible says?” “Indeed, God is all powerful, but He gave us free will to make our own choices, good or bad. Suffering the repercussions of our bad decisions is simply part of that.”
This book has scenes that deal with spousal abuse and guns. I know some readers do not like to read about these things and I read to escape reality but at the same time I want my reading to feel somewhat real and not always in a fantasy world, though sometimes I want that but these books take you into an adventure and show the reader that no matter what our circumstances are God hasn't let us down.
If you want to experience Sorrow, Joy and disbelief and faith in a new way, I urge you to read "Charity"s Cross" by MaryLu Tyndall.  I can honestly say I am glad I was introduce to these "Charles Towne Belles".
Oh, I just have to say the title fits the story well.
I am giving "Charity Cross"5 stars.
I was given a pdf copy of "Charity's Cross" by the author and Celiberate Lit for my honest review. The opinions expressed are my own.
To Purchase : http://amzn.com/B01ACLYAIY 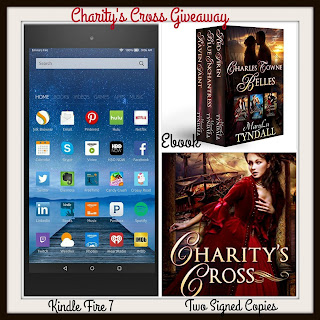 Bless you, Debbie! Thanks for the great and well-thought-out review! I know there are many readers out there who would never pick up a pirate romance. I'm glad you were "committed" to read mine, and especially glad I've converted you to my Christian pirates! God Bless!

Loved your take, I too have fallen in love with MaryLu's books! I now need to read the read of the rest of the series :)

It is a great series!