Book Description : Reverend David Nathaniel Ryder the second is now in charge of Redemption Chapel. Nathan and Grace are gone from Redemption, leaving David to deal with an unhappy Rebecca and a bitter Cassandra Bickle. If that wasn't enough problems; a new gang of outlaws, a serial killer, and a letter from their daughter Elizabeth, in New York add to David's problems. Can he find someone to help Elizabeth before she winds up dead? How will a man who believes using a gun is wrong, protect his family in the midst of outlaws and killers? Is Redemption's newest citizen the aristocrat he appears to be or is he behind all of the town's new problems? Can a man who hides his own secret sin find a redeeming character and lead a town as their only minister? When things look impossible for David and Redemption can The Preacher be found in time to make a difference? Find out all this and more in Redeeming Character, book five of the Redemption Tales. 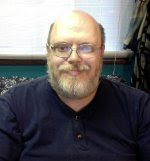 George McVey is a pastor with twenty years experience in leading people to a closer walk with Jesus Christ. He lives in Charleston, West Virginia with his wife. End of last year they moved on up to the east side, yes to a deluxe apartment in the sky.From an early age George, PG to those that know him, has been a storyteller. He never considered writing until people in his life kept telling him the stories he told and made up should be written down. Still he resisted the idea. Then in 2010 during a conversation with a fellow pastor, he was asked to send the pastor notes on prayer walking. As Pastor George put those notes together, he realized what he had was the making of a good book. That, as they say, was that and Pastor George took those notes and turned them into his first book. Since then PG hasn't stopped writing. He now has 17 published works and has several more in development.
My Review:

I did not like westerns till I started reading this series! And after reading the first book I cannot say enough about this series!

"Redeeming Character" is a story about forgiveness and a new beginning for someone that most people will be shocked to learn that needs these things! It is the Reverend David Nathaniel Ryder the Second. I think that is why I like this series so much, George McVey's characters are true to life.

I have to be honest and say this book had a few surprises for me within it pages, one is that the author made me a character in this book!  The other surprise is the mystery of the serial killer, ( not a spoiler alert, because this is mentioned in the book description). The only negative thing about this book for me is that I have to wait till the next book to learn the why and who of the serial killer.

The positive thing is that Reverend David Nathaniel Ryder the Second repents and gives up his prideful ways and that in turn leads to other's repentance.

We don't hear much of Nate in this book except he is off hunting for Diamond Dale.

The citizens of Redemption have to pull together and save the town and the church in this book, in part, and the widows have to plot to make an unhappy Cassandra Bickle happy. I am glad that even the widows have a part in this saving! It shows that everyone is useful.

This book has a new romance developing within its pages. I can't wait to see if it goes anywhere in the next book or dies out.

Yes, this is the fifth book in the series and I really think you need to read the other four first to get the full story. It is written in a easy to follow plot and you will find favorite characters to love and yes I am even going to say hate, even though these books are Christian fiction.

If you love stories that involves children and their rescuing, then this book has another  positive factor for you as a reader.

I am giving "Redeeming Character" by George McVey five stars.

I was given a pdf copy by the author for my honest review.
Posted by Debbie Curto at 5:33 PM

Thanks for the high praise indeed. Glad you loved it.