Book Description: War is on the horizon during the spring of 1861. It will be an event that will change the lives of everyone in its path. The Harper family included.
Frank Harper is a young man full of dreams and ambitions. Even when the country is split and war breaks out, Frank will do whatever is necessary to see his dreams come true, even when that means putting on a uniform and leaving home. For the first time, Claire Harper is forced to consider the reasons behind such a conflict. Should slavery be abolished? Which side should she be on, and what does God have to say about this? Claire is torn between her own opinions and those of her family. The struggle within her only increases when she repeatedly runs into a kind and handsome Union soldier. She longs to see her brother turn to Christ before it is too late. Desperate to reach her brother with the gospel, Claire pens a series of inspiring letters. Will she be able to handle all the obstacles of war and continue to be a witness to those around her?
How long can Claire last when her heart is torn in half and she is burdened for her brother's soul? How long can Frank resist his sister's urgent pleas or the gentle tugging from within? Can a man outrun a Holy God? 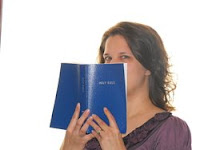 Author Info: A.M. Heath breaks out as a Christian romance novelist with the 2014 release of Where Can I Flee, inspired by her love of Christ and 19th century American history.
Being raised in a small Tennessee town, A.M. Heath grew up with a love for southern history and nostalgia. Her husband and 4 children embrace the small town lifestyle and southern standard of back porch relaxing, tea sipping, homemade comfort food, strong Christian values, and tightly woven family bonds.Inspiration can strike at any moment and spawn from a simple garden stroll, a biblical passage, one of her kid's school projects, a recipe, or a phone call from a friend. This unbridled inspiration makes A.M. Heath's stories, characters, and settings unique and fresh; an assurance for her loyal readers as new stories are projected to release in the future.

My Review:"Where Can I Flee" by A. M. Heath is a ,for lack of not knowing a better word to write, fantastic book. It is filled with all the emotions that this reader wants in a book! It has bitterness and love and fear and forgiveness and acceptance!

This story is about a brother and sister who are separated by war.  Claire is devastaed when her brother Frank joins the Confederate army. She is worried about his life but worries most about his soul.

Clare's letters to Frank are written so well by the author's words that I felt like I was really reading letters that was written while the war was raging on! I actually felt their struggles and heartaches. I think the reason I like reading this story is because the facts are true and even though battle is described, the details aren't gory ( well a little to get the idea) and such but the reader can feel the pain and sorrow the soldiers and Claire faced!

There is even a new love interest in this story for Claire, but we have to wait for book 2 to see if it goes anywhere.

Yes this is Christian Fiction, but I recommend it to anyone that likes Historical Fiction, and yes I am going to say I believe this story would make a great movie.  Fans of "Gone With The Wind" would love " Where Could I Flee". It is not a remake of "Gone With the Wind" at all just the same time period in history.

"Where Could I Flee" by A.M.Heath is definitely a five story book.

I only have one complaint, I really didn't want this book to end, I cannot wait till the next book in the series is out!

I received a copy of this book from the author in exchange for my honest review. All opinions expressed are my own..

Here is a video about the book https://www.youtube.com/watch?v=IrSvfpn2EIo

Thanks so much for sharing, Debbie! I'm so glad you enjoyed it!!

This was such a good story and I really am waiting for the next book!