"We Three Kings" by Martin Gibbs 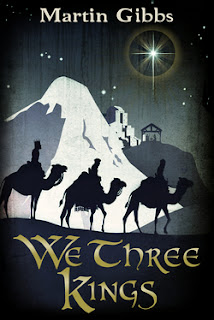 They came from the East and brought gifts to the Son of Man. Some called them magi, while others named them wise kings who had seen a star. But who where they, really? Were they rulers, astronomers, philosophers, or something else?

We Three Kings is an adventure, a spiritual journey of discovery, and an extended prayer. It asks simply: What would you give up in order to follow a star, a dream—Jesus? When would the burden be too much or the trail too narrow?

Tested, beaten, and tempted, the three kings stuck to their faith, and it brought them to God.

The three kings gave away everything to follow a star: their kingdoms, money, power, and even their own identities. Did they make the ultimate sacrifice?
My Review: "We Three Kings" by Martin Gibbs is a story based on what the author thinks might have occured as King Balthazar, King Melchior and King Jaspar traveled to meet the newborn Son Of Man.  The Bible doesn't tell us much about these three kings. The  story is different than I expected but I still liked it.  I have never really thought about how hard of a journey it must have been for these kings. They gave up their everything to to follow a star. They did this to find God.  I never thought about Satan doing his best to stop them and how much of a fight it was for these early worshippers to avoid the snares he threw at them.  The author takes the reader on the kings journey and lets us into what their secret thoughts might  have been while traveling. I never imagined the dangers these kings must have overcome such as encountering cannibals and possible thieves. There is almost the meeting with Herod. I think after reading this book, the next time I read or heard the Christmas Story I will have more appreciation for these three kings and how they must have overcame great trials, or at least I hope I do.

This book makes me think more about how marvelous the Christmas Story is. I think this story would be great to read at Christmas and any time.

I was given a complementary copy Of "We Three King" by the author and Christian Women Affiliate. These opinions are mine own.

Author Bio:
Martin Gibbs is an avid reader turned author, though reading always comes first. He enjoys cross-country skiing, biking, and burning béarnaise sauce (although his take on Lasagne al Forno can at least elicit smiles from the kids).Martin lives in the snow-covered paradise of Minnesota, USA

We Three Kings: The Journey of the Wise Men can be purchased on Amazon, in Paperback or Kindle version.
Posted by Debbie Curto at 6:02 PM