"Rock Of Ages " Blog Tour and Give Away 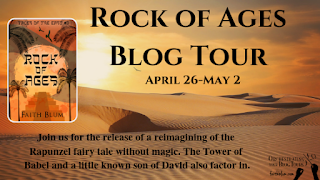 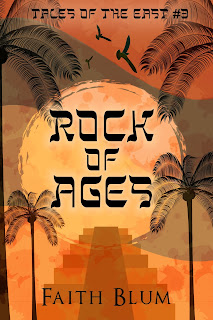 All he wanted was his father’s approval
Chileab is born to privilege as the second-born of King David, but he still feels like an outcast. His crooked foot make it hard for him to do anything and although he enjoys being an advisor for his abba, he never feels like King David approves of him.
Born with unnaturally light hair, Rina loves helping her mother heal people around their small village. One day, her life is turned upside down when she is kidnapped by two Amalekites bent on using her for her healing powers to make them rich.
When Chileab hears of the little girl who had been kidnapped, he goes off to find her, even though five years have passed.  He makes his way into the desert by himself. Can he find Rina? Will he learn that Adonai’s approval is all he needs? Will he learn to rely on more than just himself?
A Rapunzel reimagining set during the time of King David

(Feel free to do a jigsaw of the book cover here: https://www.jigsawplanet.com/?rc=play&pid=3c9cd83c70d4)
About the Author 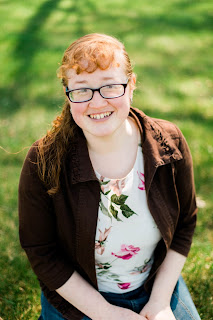 Faith Blum is a small-town Wisconsin girl. She has independently published over 25 books in over five years. Most of her books are Christian Historical Fiction with an emphasis on Westerns. During an eBook sale, she was #1 in Christian Westerns and Christian Western Anthologies on Amazon. During that sale, she sold over 3,000 copies.

Faith currently resides in Central Wisconsin with her husband and their cat, Smokey. When not writing, you can find her cooking food from scratch due to food allergies, doing dishes, knitting, crocheting, sewing, reading, or spending time with her husband. She loves to hear from her readers, so feel free to contact her on her website: https://faithblum.com.

Author Interview
1. How did you come up with using song titles  as the titles for your books?
I titled my first book A Mighty Fortress, and when I decided to make the book into a series of books, decided to title the series Hymns of the West. This required hymn titles, obviously. Since that went over so well, I decided to make that part of my brand.

2. And what is your favorite Hymn?
This is hard. I’d have to say a newer one, In Christ Alone.

3. What was one of the most surprising things you learned in creating your books?
How to play poker. *hides* In my WWI novel I’m working on right now, my character plays poker and instead of just saying “He played poker,” I decided to actually learn it a bit. Just enough to describe one round of playing, though.

4. What would you say is your interesting writing quirk?
Probably that I can’t write easily in coffee shops. Lots of writers love writing in coffee shops, but I find it distracting.

6. What is the first book that made you cry?
When I started reading this question, I had no idea, but then somehow I remembered. I’m pretty sure the first book to make me cry was Where the Red Fern Grows.

7 . How do you select the names of your characters?
Most of them are from the Bible. Otherwise I just think of a name that would fit the person it’s for. I do sometimes use a baby name website as well.

8. If you didn’t write, what would you do for work?
Probably as a secretary or some position similar to that.

9.  Do you read your book reviews? How do you deal with bad or good ones?
Not usually. I did for a while, but then came across one that really hurt me and decided not to read them any more. But then yesterday (April 21st, I did read some of the reviews on my short story. Even the 1 and 2 star reviews for that one were pretty good. Not that this means I’ll read more. How do I deal with the bad ones? I stop reading all the reviews except those that are done for my blog tour.

10. Do you hide any secrets in your books that only a few people will find?
Not intentionally.

Excerpts
#1
Rina flitted from plant to plant in her garden. Each one had a different use, though some healed in similar ways. Her mother would be happy to know that the one plant she needed most had decided to grow longer this season than it usually did. Rina made sure she picked every little bit of hyssop she could find.
As she picked, she hummed to herself. A habit her abba didn’t particularly care for, but which Ema never complained about it. She was nearly a woman, though still only ten, and her abba seemed to never think she would grow up.
The wind tugged at her skirts, and she tightened her grip on the basket, closing her hand on the leaves inside to keep them from blowing out. The leaves were too light to keep the basket from flying away if the wind grew too strong.
She smiled as she picked the last leaf. Now to return home with her bounty.
A hand came out of nowhere and covered her mouth. She tried to scream, but only the faintest squeal came out. She struggled to get away from the strong arms surrounding her.
The basket fell out of her hands and Rina’s first thought was of all the precious hyssop that would be wasted. Then a gruff voice hissed into her ear as he grabbed her waist with his free arm. “Be quiet, girl. Be quiet, and no harm will come to you.”
Rina’s heart raced, and she nodded. She stopped struggling in case that was part of being quiet. Her breath came in short gasps through her nose and her eyes stayed as wide as they could be.

Chileab forced himself to not storm out of the room. His father had made him and four of his brothers advisors to the throne. But how could they be expected to advise the king when they weren’t even old enough to serve in the army or be married? Chileab had initially felt honored to be allowed to join them, but he took the privilege seriously. His brothers did not. Ever since his brothers had become counselors to their abba, they had gone around as if they were someone special. They weren’t. True, they were sons of the king of Israel, but that didn’t make them any more special than anyone else.
Someone hit his shoulder. “I spoke eloquently, did I not?”
Chileab grimaced inwardly. His brothers had caught up with him again. He had hoped they would linger in the hall so he could reach home without having to talk to them. “As always, Amnon.”
Amnon grinned. “And you always have something dull and unpoetic to say. Why is that? Perhaps because you cannot fight with a sword? Or maybe because even a slingshot won’t fly straight for you.” He laughed and Absalom, Adonijah, Shephatiah, and Ithream joined in.
Chileab ground his teeth together. “It is the rock that doesn’t fly straight, not the slingshot. But I won’t belabor the point. Excuse me, please. I need to get home.”
“Aww!” Amnon said with the biggest fake pout Chileab had seen that day. “Poor boy needs to go to his ema and lick his wounds. Maybe then he can survive until tomorrow. After all, no one wants to miss the big debates at King David’s council.”

“I know you don’t want me to go,” Chileab said, “but I want to help someone. I need to do something worthwhile.”
Abigail’s smile faded, but she nodded. “I know you think that. It is dangerous out there, though.”
“Ema, I am a grown man. I know this journey will be dangerous, but there is little for me here.”
Abigail pulled him into a tight hug. “You are an advisor to your father. And you will always have me.”
“I know, Ema, and I appreciate that, but helping the king is more frustrating than anything else. I need more than that. I need to do something. I can’t go with Abba into battle and my brothers refuse to be around me. This is something I need to do alone and at my own pace.”
“Alone? Can’t you bring someone with you?”
“No.”
Abigail looked up at him with pleading eyes. “Why not?”
Chileab pulled away from her and paced around the room. “I don’t want anyone rushing me to do things or telling me to go faster or anything like that. I need to do it alone.”
“But—”
He faced her. “Ema, please don’t argue. I know it is safer with more people, but when I’m one of those people, all I do is slow them down. Even if they say it is okay to go slow, I know they chafe against it.”
“No, they don’t.”
Chileab smiled and reached down to touch her shoulders. “Ema, they may think they don’t or say they don’t, but I can tell that they do. There is no need to protect me from it. I have known it all my life.”
Abigail leaned her head on his chest. “I wish I could have shielded you from it more.”
“You did everything you could, Ema. I couldn’t have asked for more. Will you help me prepare to leave?”
“Yes, of course.” 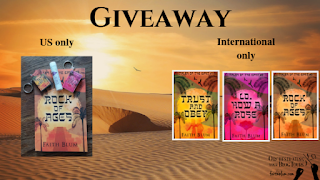 May 2
A Brighter Destiny – Author Interview