Publication Date: May 3, 2013
Michael Steele has tried to be an adult since he was seven. Losing his dad early on and living with a liberal mother has given him a distorted view of life and love. The gritty streets of Chicago is where he works. He encounters everything from thugs and cons to his homeless uncle. He’s used to being lied to and conned, but not by his grandmother, Nana Steele.

While living in and out of Nana’s apartment, he finds himself at odds with her nurse, Jessica White. His liberal ways, and loose love life, has her on the offensive. His occupation as one of Chicago’s finest, in her eyes, is his only redeeming quality. When Michael’s dispatched to Nana’s apartment he finally understands why Nana is so elusive on the topic of her nurse. Jessica White is stunning and as Nana knew, the minute their eyes met, sparks began to fly.

Michael has a lot on his plate, an aging grandmother, a homeless uncle, and now a blonde beauty that won’t give him the time of day. Why does he care, why does he need to prove anything to anyone. He wants to go back to the way things were before he first held Jessica White in his arms, but for some reason he just can’t. 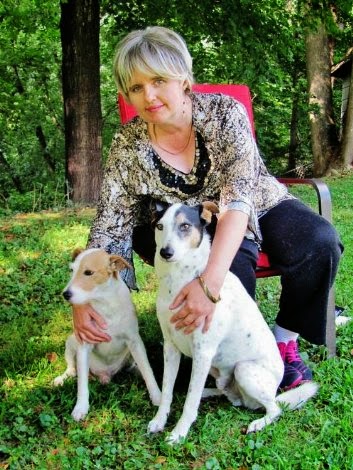 Samantha Fury
www.samanthafury.com
Samantha Fury was born in Kentucky, the daughter of a coal miner & his loving homemaker. She is an only child so she spent many hours using her imagination to keep her busy. She graduated in 1984, got married in 1986 and began what she calls her 'life on the road.'
Samantha spent over eighteen years traveling with her husband, through 48 states & Canada. This gave her lots of experience for the backgrounds of her Novels. These days she spends her time tending to her dogs, Jack, Max, Socks, and writing/working on several forums, websites, and author groups.
Samantha calls her genre, Life Fiction. Many think Samantha writes romance, and though her novels contain romance they do not center on that alone. Her novels shows real life struggles, a little detective work, and humor when at all possible.
Samantha has many stories to tell, and she hopes to be around writing for many years to come. Samantha has loved writing since the early age of eight and she hopes that her stories can uplift, entertain, and be a blessing to her readers.
Samantha Fury also writes Romance under the pen name Samantha Lovern

"Reasonable Service (Street Justice Book 3)" by Samantha Fury is a five star novel. It is the third in the "Street Justice Series"and in my opinion is the best of the three!

In this book Jerry, a former criminal, and his helpers opened a shelter and clinic for homeless people. One of his helper ends up being a street person! I won't tell you in what capability but I think if you take the time to read this story you will be glad you did!

Not only is the helper in the shelter a surprise, his relationship to Michael is a surprise but it makes this story that much more delightful!

I really like the life lessons that this book implores throughout this story, that tells the readers that until we give everything to God and really become His child he doesn't have to help us. ( I know not all will understand this statement but I hope it really touches and helps someone)

Like the other books in this series, the romances is just as intense but clean unless you don't like flirting and kissing in the books you read! Michael's grandmother prayed for Jessica and him to meet and now that they did she wonders if it is a good thing!

Angel is back on the job and saves a young man from a life of crime. Charlie is still trying to decide if she is doing the right thing by dating him as he hasn't made the trip to the altar to accept Christ yet!

The ending of this book has me anxiously waiting for book 4 which the author has informed that she is working on, I am on pins and needles wanting to know the ending but then I am not sure I want to know if the series doesn't end the way I want it too! You know us readers have the way the story should end all planed out in our minds ( and sometimes we are pleased when it ends differently then we planned but then other times we wonder how it would have worked if it went the way we wanted it too)

I was given an ebook copy for an honest review by the author!
Posted by Debbie Curto at 4:16 PM

Great review Debbie! Yes, we always have the way a story should all planned out in our minds!! That is me all the way!

Thanks for the great review. I love this story too, and it is one of my favorites. I felt it came together nicely. I wanted to wrap up Jessica and Mike but I felt I couldn't do it justice. To be honest sometimes characters do tend to take things in their own direction.

I will do my best to not keep everyone waiting long. I never intended on having a cliffhanger of sorts but Jessica had other things in mind. Thanks for reading and thanks so much for sharing. When I release Mending Fences I'll have Debbie invite me over for a release party and we'll give away some copies.

Thanks for the read and blessings!
Samantha Fury