Petite Juliana Beauchamps possesses a vivid imagination, which comes in handy as a librarian. When a handsome giant of a lumberjack comes to town and rescues her from possible tragedy, she’s shaken by the event. A dashing beer baron, from Milwaukee, also pursues Juliana’s attention. Meanwhile, a library trustee determines to push out the female librarians.
Set in 1891, in Michigan’s Upper Peninsula, Book Three in The Christy Lumber Camp Series focuses on Richard “Moose” Christy, the youngest of the sons, as he prepares to manage his first lumber camp. When Yost hires Juliana to organize his personal library, and her letters from Wisconsin suggest foul play, will Richard need to save her once again? And will his secret need to be revealed to win her heart?

Author Info:
"Yooper" Carrie Fancett Pagels writes Christian historical romances about overcoming. Possessed with an overactive imagination, that wasn't "cured" by twenty-five years as a psychologist, she loves bringing characters to life. Carrie and her family reside in Virginia's Historic Triangle, which is perfect for her fascination with history. Carrie enjoys reading, traveling, baking, and beading--but not all at the same time!
My Review:
"Lilacs for Juliana"is book three in "The Christy Lumber Camp series" by Carrie Fancett Pagels. It is a really enjoyable read. It is a standalone title but I recommend reading the other two novels in the series

"The Fruitcake Challenge"  and "The Lumberjacks' Ball" because the characters from these books are also in this book.

""Lilacs for Juliana" is really a love story between Juliana Beauchamps and Richard Christy. Richard is aka (Moose or a real life Paul Bunyan).
I really like how Juliana ends up with her "lilacs".
I have said this book was a love story but it isn't your typical love story as Juliana and Richard have obstacles to overcome.
I recommend "The Christy Lumber Camp series" by Carrie Fancett Pagels to anyone who likes history with a little folklore and a truly fun read!
I have given each of the three titles in this series five stars. 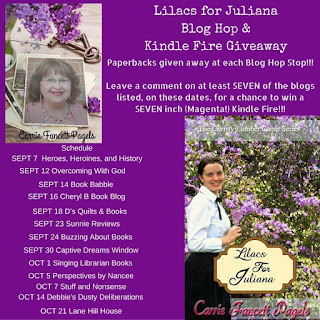 Links to the other blogs in the blog hop are below!  Be in to win!!! Stop by each link (at least 7 of them to qualify for the GRAND PRIZE!!!) and leave a comment and your email address in a safe format!  You might be the winner of a KINDLE! And a paperback copy will be given to a winner at each blog stop!

Comment below to enter for a paperback copy or ebook copy for international.

I do like history with a little folklore and a truly fun read! Sounds like a great story... Trisha B d_stevens310AT live(Dot)CoM
(signing in using family computer :) )

Debbie, thanks for the great review. Carrie, thank you for sharing your love of Michigan's Upper Island. I would love to visit someday. :)

Thanks for having me on Debbie! It's great to visit your blog again and thanks for being in on the Blog Hop! Blessings!

Trisha, so great to see you here and I want you to know you are in on the Grand Prize giveaway, having commented on at least 7 blogs so I will enter your name! Best wishes! I LOVE folklore!!! Hugs!

We have to get you up there Caryl!!! Hugs!

Ahh, the lovely UP. We love to take trips to travel there for the sights. We are trolls (under the bridge, lol) and this part of MI is beautiful too. Great review! I cannot wait to read it. I love reading about the lumber industry of MI.
lattebooksAThotmailDOTcom

A real life Paul Bunyan is always a fun thought :)

The Substitute Bride is set in Shepherd, MI, which is in Central lower Michigan, Susan! So hopefully you'll like that too! Blessings!

Thanks, Debi! I hope you will enjoy it!

I sure thought so, Becky! Paul Bunyon stories came after the time of this story, which is why he is referred to as Paul BonJean! Blessing

All of the books look wonderful lined up like that.

I have enjoyed your review Debbie!Always love your post.Looking forward to reading Carrie'sbook.jackie_tessnair@yahoo.com

Am loving the blog hop! And reading all the different reviews....but they all say the same thing: this is a great story not to miss...thanks for the chance! I have the other two in the series :-)

awesome! thank you Carrie
Trisha B :)

I love the Paul Bunyan characer in Lilacs for Juliana, as well as the fact that Juliana is a librarian. Great read!

Librarians rock the world for readers, right Sydney? And thanks for being a singing librarian!!!

Thanks, Trixi! I've been so blessed by these wonderful reviews!

Thanks so much, Jackie! God has really helped me with my writing! Blessings! Debbie did a nice job, didn't she?

Yes, they do! Thanks, Mary!

This has been a great blog hop for Carrie! Thanks for being part of the team.

Librarians rock!!! We have the best ones at our NC home. :-)

I love books so am intrigued by the main character being a librarian! :-) my first novel that I ever tried writing was centered around as librarian.

You'll have to meet some of our local Virginia librarians, Anne! Yes this has been a nice blog hop!!! Thanks for being part of it, Anne!

That is neat that your first novel featured a librarian! Thanks for coming by!

Thank you for your review! And this book is certainly worth the read! sabs[dot]joy[at]gmail[dot]com

I love reading history and folklore. Especially from such a wonderful author. fishingjan[at]aol[dot]com