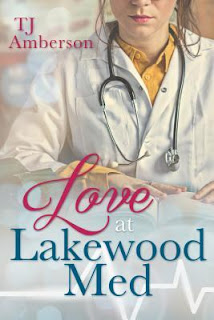 ​GOODREADS | AMAZON
10 Behind the Scenes Facts about the Book

1. TJ Amberson started writing LOVE AT LAKEWOOD MED in 2012, put it aside while she wrote and published two other novels (THE KINGDOM OF NERETH, FUSION), and then returned to the story in 2016.
2. The working title for the book was WHITE COATS & STETHOSCOPES.
3. TJ queried Cedar Fort Publishing & Media with the manuscript because she thought that the company would be interested in publishing a clean romance.
4. The novel was originally scheduled to be released in October 2017.
5. Dr. Kent’s name was initially Dr. Hunt. But after someone pointed out that this was the same name as a character in a medical television show, TJ wanted to change her character’s name to something else. TJ decided on Dr. Kent because she felt that it had a strong yet approachable sound to it.
6. The figure on the front cover of the book was designed to stay true to the main character, Savannah, including the slightly messy hair and white coat.
7. One of TJ’s favorite scenes to write was the night hike.
8. TJ found that the restaurant scene was one of the most complicated and nuanced scenes to write.
9. Lakewood Medical Center is a fictional place, and TJ Amberson deliberately does not say in the novel where it is supposed to be located.
10. While the characters in LOVE AT LAKEWOOD MED are fictional, the character of Lynn Prentis pays homage to one of TJ’s friends. 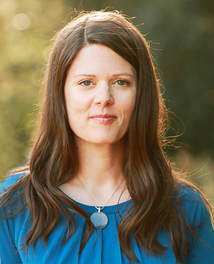 TJ Amberson hails from the Pacific Northwest, where she lives with her husband and nutty cocker spaniel. Her most recent novels include The Kingdom Of Nereth, Fusion, and Love at Lakewood Med. When she’s not writing, TJ can probably be found enjoying a hot chocolate, pretending to know how to garden, playing the piano, or surfing the Internet for cheap plane tickets.
GOODREADS | FACEBOOK | WEBSITE ​

1. Who or what inspired you to become an author?Writing is just something that I have done for as long as I can remember. From the time I was in very early elementary school, I was penciling 50+-page-long stories on notebook paper and handing them in to my teachers to read. I will forever be grateful to those teachers for supporting me and encouraging me to continue writing.
2. What did you want to be when you grew up?  Did becoming an author ever cross your mind?I thought about doing so many things! Movie editor, astronomer, professor, volleyball and basketball coach, pediatrician…and for the most time, I wanted to work at Mission Control for NASA. Throughout, I never really thought about “becoming” an author – writing was simply something I always did on the side, in addition to whatever other interests I was pursuing.
3. What top 5 book(s) do you currently have sitting on your TBR pile?1)A Wrinkle In Time by Madeleine L’Engle (haven’t read it since elementary school!)2)Lethal Licorice by Amanda Flower3)Assaulted Caramel by Amanda Flower4)The Lady and the Gent by Rebecca Connolly5)Love Remains by Sarah Eden
4. What inspired the idea for Love at Lakewood Med?The concept for the story was very loosely inspired by my own journey as a medical student and emergency medicine resident.
5. What do you want readers to take away from reading Love at Lakewood Med?First and foremost, I hope that readers love the love story! I hope that readers say they enjoyed getting lost in a fun romance novel that made them laugh, cry a little, and swoon!  I hope that readers also come away feeling as though they were right there in the emergency department, watching the chaos, getting surprised by the unexpected, and feeling the complexity of situations that often arise there.
6. What is your current WIP?  What can you tell us about it?Yes! I am working on the sequel to my YA historical fantasy, THE KINGDOM OF NERETH. I am having so much fun getting back to the fictional, medieval land of Nereth, and I’m extremely excited for my readers to see what adventures await the band of characters.
Blog Hop Schedule 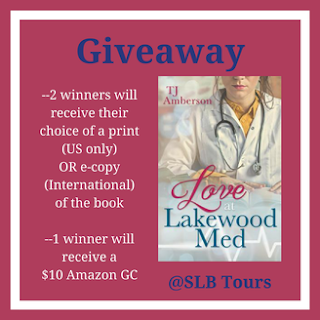 Thank you for being part of the Blog Hop for "Love at Lakewood Med" by TJ Amberson. I'd love the opportunity to read this book.
2clowns at arkansas dot net