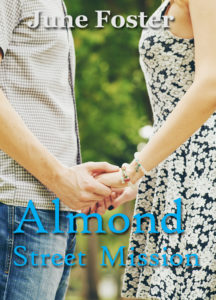 Name of book: Almond Street Mission
Author: June Foster
Genre: Contemporary Romance
Release Date: September 6, 2016
When Glorilyn Neilson’s nineteen-year-old brother, Tannon, goes missing without a trace, she’s frantic. Prayer and volunteering at the local homeless shelter in El Camino must fill the time until her sibling returns. But her sapphire eyes and auburn hair inadvertently cause a stir among the male population at the center. Her life changes one evening when she’s attacked by a burly vagrant intent on rape in the alley behind the building.
Jeremiah Goodman loves the Lord, but he’s homeless. When he witnesses a foul-mouthed vagrant overpowering one of the volunteers at the homeless shelter, he defends her, saving her from unwanted advances.
When Glorilyn offers him a way of escape from his impoverished lifestyle, he can’t tell her why he must live the life of a vagrant. What powerful secret keeps him on the streets?
Click here to purchase your copy. 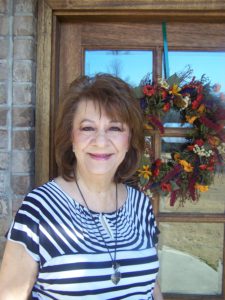 An award-winning author, June Foster is a retired teacher with a BA in education and MA in counseling. June’s book Give Us This Day was a finalist in EPIC’s eBook awards and a finalist in the National Readers Choice Awards for best first book. Ryan’s Fatherwas one of three finalists in the published contemporary fiction category of the Oregon Christian Writers Cascade Writing Contest and Awards. Deliver Us was a finalist in COTT’s Laurel Awards.
June has written four novels for Desert Breeze Publishing. The Bellewood Series, Give Us This Day, As We Forgive, and Deliver Us, and Hometown Fourth of July. Ryan’s Father is available from WhiteFire Publishing. Red and the Wolf, a modern day retelling of Little Red Riding Hood, Books One, Two, and Three in the Almond Tree Series, For All Eternity,Echoes From the Past, and What God Knew are all available from Amazon.com.
Recently June has seen publication of Christmas at Raccoon Creek, Lavender Fields Inn, Misty Hollow, Almond Street Mission, Restoration of the Heart, and Letting Go, all published by Forget Me Not Press, a division of Winged Publications.
June enjoys writing stories about characters who overcome the circumstances in their lives by the power of God and His Word. June uses her training in counseling and her Christian beliefs in creating characters who find freedom to live godly lives. Find June on line at junefoster.com.

Stories Behind the Story
Almond Street Mission tells the story of Glorilyn Neilson whose younger brother, Tannon, has gone missing, hurling her entire family into turmoil. Prayer and volunteering at the local homeless shelter fills the empty, lonely hours. One evening, she’s attacked by a brawny vagrant intent on rape. Another vagrant, Jeremiah Goodman, defends her, saving her from unwanted attention.
Jeremiah loves the Lord but is homeless. The mission director, Mr. Harris, offers him and nineteen-year-old, Tank, a place at the shelter. But when Jeremiah later tries to protect a drug addict in hope of sharing the gospel with him, Mr. Harris finds heroin on Jeremiah, and he’s booted out. Tank chooses to leave with him.
On the street, Jeremiah and Tank try to scrape up a meal, but even trash cans around the city park don’t provide food for their hungry stomachs. Taking a chance on getting arrested, they beg for food in front of an elegant downtown Italian restaurant. Two older women walk out. One ignores them but the other looks at them with kind eyes and offers an entire pizza.
All this to explain a real life happening which gave me an idea for this scene. My daughter and I were in Chattanooga, Tennessee, at an Italian restaurant. We each ordered a small pizza, but the waiter brought me a Hawaiian pizza though I’d order pepperoni.
When I pointed out the mistake, the server brought out a second pizza for me, this time pepperoni, and told me to keep the first one. No way I could eat another pizza, and we didn’t have anywhere to keep it at the hotel, so I asked him if he knew any homeless people. The waiter said yes, that they congregate nearby, and he’d deliver it to a hungry vagrant.
In the story, the other woman who gives the extra pizza to Jeremiah and Tank is above average height. I wrote myself into a brief portion of the scene, and my 5’10” height qualifies as tall! When Tank says “God bless you,” the lady says “He does, everyday.” The sentiments of my heart. Real life always provides rich fodder.
Another story behind the story is when a friend at my church mentioned a Christian homeless ministry in the nearby city of Birmingham, Alabama, The Jimmie Hale Mission. I called and asked if I could take a tour. A chaplain welcomed my husband and me and scheduled a time for us to visit. He promised to personally conduct our visit.
When we arrived, the chaplain took us through the dining facility, exercise room, chapel, clothing bank, computer rooms, classrooms, and dorms. While in the dining area, we met the efficient kitchen manager, a paid employee who provided three delicious meals a day for the residents. Tingles ran down my arms when he shared his experience. He was once a drunk and resident of the mission. Today, he loves the Lord, is reunited with his wife, and holds down the manager’s job. As a side note, I based two characters’ situations on this real life man.
While at the mission, the men learn job skills and have opportunity to take classes. When they leave, they’re fully grounded in the Lord and on their way to a new life. A few are employed at the facility.
Before we left, the chaplain generously gave me his cell phone number and offered to answer any further questions, and I had several. Research for this story provided a rich insight into how God’s power can change and equip those that society may have chosen to discard. 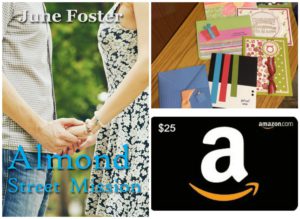 In honor of her tour, June is giving away a grand prize collection of 1 signed paperback copy of Almond Street Mission, a $25 Amazon card, and 12 handmade cards! Click the link below to enter! https://promosimple.com/ps/c0a6
Posted by Debbie Curto at 5:07 AM

Great review, Debbie! You left me intrigued, wondering how the book will end! This sounds like a good book that will keep my attention until the end.

My church has "Compassion House" where people can get food, clothes, shoes, and learn about Jesus. We also have meals at the "Breaking Bread Cafe" 2 nights a week.
Thanks for entering me in your giveaway.
Janet E.
von1janet(at)gmail(dot)com